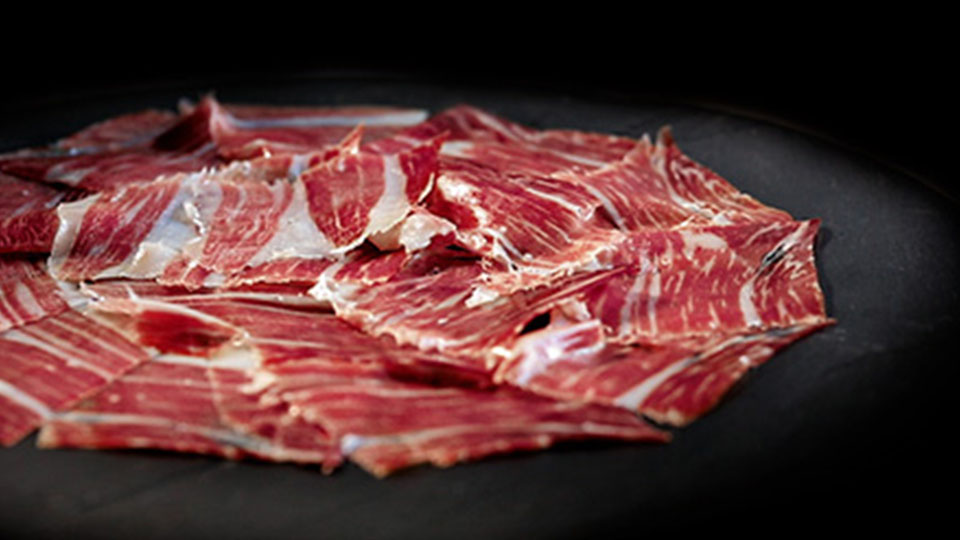 When we talk about 100% Bellota Iberian Ham, we’re not just talking about flavour. We’re talking about tradition, a date -1879- and years of ancestral experience breeding, producing and carving. We’re talking about Jabugo. Our hogs are raised in freedom in this territory situated within the National Sierra de Aracena and Picos de Aroche Natural Park, which has been declared a Biosphere Reserve by UNESCO. We’re talking about the Dehesa woodlands with sublime geographic and climate conditions which help make it so the quality of our 100% Iberian hogs is the best.

The ham production process is a costly and passionate tasks which converts our product in the great Treasure that it is. From the time a piglet is born until the 100% Bellota Iberian Ham is served on a dish in front of us, a long and elaborate process takes place which has been improved following more than 130 years of experience, work and wisdom. The residents of Jabugo have always participated in the development of 5J Cinco Jotas, offering knowledge that has been acquired and handed down generation to generation. This tradition continues to be maintained nowadays at our cellars in the area.

100% Bellota Iberian Ham is also an undisputable and irreplaceable part of the Mediterranean Diet which was declared Intangible Cultural Heritage of Humanity by UNESCO in 2010. 100% Bellota Iberian Ham also has numerous health benefits: it improves cardiovascular functioning, one’s metabolism because of the anti-oxidant properties and prevents disease due to the large quantity of essential vitamins that are so health beneficial.

But essentially what we find when it is served on a dish and we put it in our mouths is what makes 5J Cinco Jotas 100% Bellota Iberian Ham the Treasure of Our Heritage. More than enough reasons can be found after that. A privilege for our country, it has crossed all possible borders as its flavour, aroma and quality are the best possible introduction.